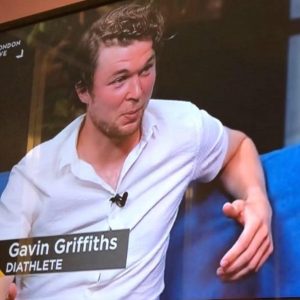 Mr Griffiths was diagnosed with type 1 diabetes at the age of 8, in January 2000. He openly shares how some of his biggest struggles were in the emotional acceptance of this condition, in feeling different and mentally isolated during his school years. A love for sports, which to begin was not being medically recommended for him, brought both many lessons to learn and personal confidence in taking steps towards independence of self management in adolescent years. Gavin went on to play semi-professional level football in late teen years before transitioning into marathon running – the latter influenced by finding a willingness to engage with others also impacted by diabetes.

To date, Gavin has completed over 100 endurance challenges around the world, always connected to either fund or awareness raising initiatives in this cause. Some of Mr Griffiths’ adventures include: being a London 2012 Olympic Torchbearer; running 30 mile marathon routes every day for 30 days from John O’Groats to Land’s End in 2013; running 40 miles in the South Australian Summer from Mt Lofty Summit to Semaphore; running around Long Island, NY, over 7 days for Marjorie’s Fund; cycling from Brussels to Paris and then Alp-bound to Geneva in 10 days during the mHealth Grand Tour in 2015; trekking 5 days around the active Icelandic volcano, Hekla in the World Diabetes Tour challenge in 2016; operating a series of community 5km runs across 6 continents of the world in the 2017 DiAthlete Global Tour with local diabetes communities; running 25 marathon distance routes in 1 month circulating the United Kingdom in 2018; leading an expedition of 11 international advocates with type 1 diabetes on a 3 day trek in the Costa Rican rainforest from Los Santos to Quepos in the LOD Global Challenge 2019.

Mr Griffiths received an IDF Longstanding Achiever Award at the end of 2019 from IDF Europe, for his work to empower patients and improve diabetes care across the European continent. He also became the 2nd ever honorary member of the International Society of Paediatric & Adolescent Diabetes (ISPAD) nominated & unanimously approved at the 45th annual ISPAD Conference held in Boston, MA in 2019.