There can be many questions and differing outcomes (which means more questions) when it comes to Sports & Exercise with type 1 diabetes.

With many factors to consider from timings of insulin doses, nutritional decisions, types of activities and, more so, the types of movements performed within those activities (where every performance might differ to the next), we believe the best approach is to breakdown each detail and customise them to your personal routines to find the best solutions. This page will share key guidelines both scientifically and from shared experiences. 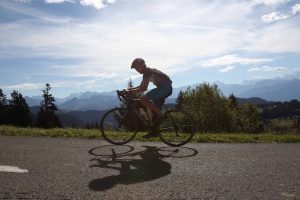 Gavin Griffiths, founder of DiAthlete and ultra-endurance runner who has lived with type 1 diabetes for over 20 years shares his thoughts on preparations before any exercise: 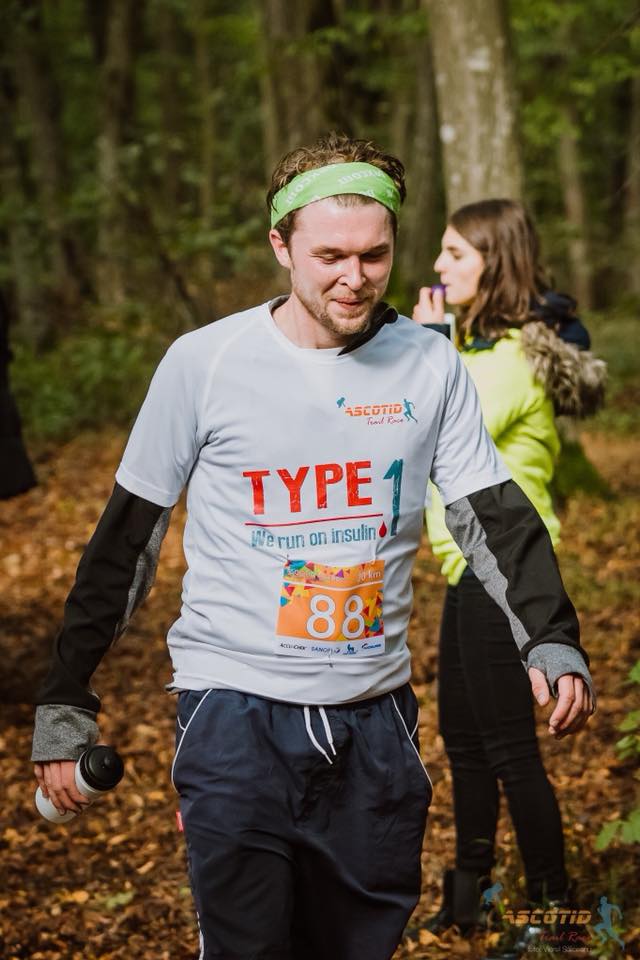 “There are a lot of differing areas to consider when it comes to sports or exercise in general with type 1 diabetes. Pre-activity preparation does not only mean doing the standard warm ups before a game or workout as an athlete, but with diabetes in the equation it means planning for your routines in advance where possible.

Having an added focus of ‘diabetes discipline’ on your particular sports days can set you into the best positions for balancing glucose levels before, during and after activity – and more so, performing to your best as a result. Let’s make it clear to begin, living with type 1 diabetes does indeed require a lot of added responsibility, yes, but with this you CAN perform to any level and achieve any life goals you have. 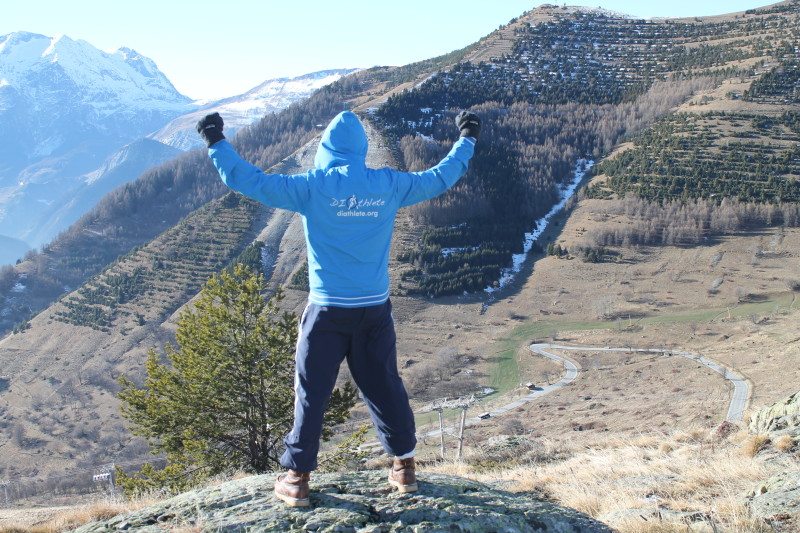 Paula Chinchilla from Costa Rica has lived with type 1 diabetes for 21 years and is also a certified diabetes dietitian working for the NHS in the United Kingdom. She explains in the following video about how to manage type 1 diabetes when you do sports, combining knowledge of your own body when doing sports with nutritional advice.

The most important advice Paula gives about sports nutrition and type 1 diabetes is the following: 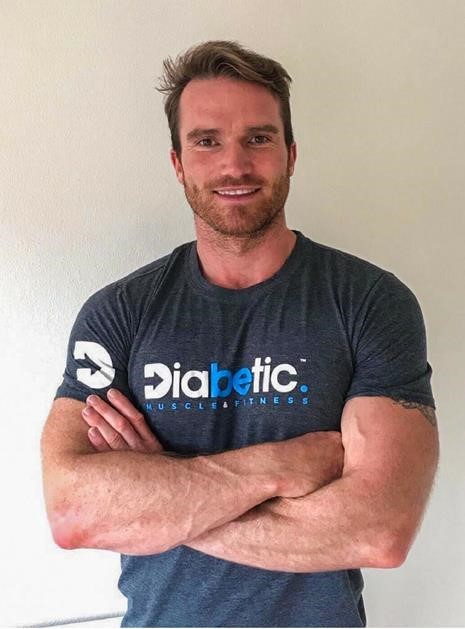 John Pemberton, RD, is a paediatric diabetes dietitian at Birmingham Children’s Hospital, and like Paula, also lives with type 1 diabetes having been diagnosed in 2008. John shares a diabetes and exercise plan:

Aim to eat a meal or snack about 1-4 hours before training or competition, depending on your schedule.

Your carbohydrate intake at this meal should be a minimum 1g/ kg body weight.

For all exercise that lasts longer than 1 hour, you should consume some carbohydrate. Your carbohydrate needs will vary with the type and intensity of the exercise.

When you do high intensity/anaerobic exercise you may need to have your exercise carbs at the end of the exercise, rather than during.

Exercise snacks – nutritional guide
The amount of snack you need during your activity will vary, you need to look at the labels to check your snacks. Look at portion size and amount per portion as well as per 100g.
Avoid high fat snacks during exercise.
The amount of carbohydrate you need will depend on your activity and the duration. You will have a specific plan for each activity. 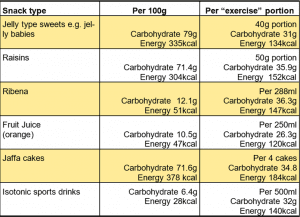 After exercise you need

To allow your muscles to “recover”. This means replacing the carbohydrate stores (muscle and liver glycogen) that have been used, repairing and rebuilding muscle tissue and replacing the water that is lost from the body.

You should try to eat within an hour of finishing your exercise. This may mean taking food with you in your kit bag to eat at the end of a training session.

After exercise recovery snacks
Make low fat choices – you need to make sure that you choose low fat foods so you do not end up eating too many calories. Examples:

Eating good quality protein foods is part of eating well for sport. You should try and include a variety of protein sources, have lean red & white meat, poultry, fish (try and include oily fish also), beans and pulses.

See the end of the food list for the amount of protein in different foods.

You need protein to repair and build muscles and tissues. To increase your muscle mass, strength and power you need resistance training coupled with good nutrition.

Training should increase muscle size or strength if adequate nutrition is provided to fuel and recover from the exercise.

To improve strength and muscle mass you need to;

• Consume sufficient energy (kcals) to meet the demands of the training.

• Eat an appropriate amount of protein. To use protein for building muscles you need to be getting enough energy from carbohydrate foods to meet the energy cost of your exercise.

• Use the food lists at the end of the booklet to ensure you are getting enough protein per day. 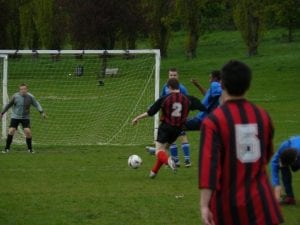 John Pemberton continues with explaining: “the type of exercise you do will affect your blood glucose differently.”

Anaerobic Exercise is high intensity activity which uses mainly muscle glycogen to produce ATP. Anaerobic exercise is usually performed for short periods of time, and requires all out effort.

Anaerobic exercise which only lasts for a short period (e.g. Sprinting, javelin, shot-put) will often produce an increase in blood glucose. Any exercise that includes short burst of all out effort may also increase blood glucose.

Aerobic exercise is lower intensity at one pace and relies more on blood glucose that comes from liver glycogen and/or carbohydrate intake.

Aerobic exercise will generally lower blood glucose both during and after the activity.

Gavin Griffiths adds: “one great way to measure it is by your heart rate. We all know, and feel, that when we begin exercise our heart-rate begins to increase. This is also an example of how you have to customise the preparations and outcomes of blood glucose to your body; those who are active on a more regular basis may not have quite a sharp heart-rate rise as those who do not exercise as often. When I go for a jog, my heart rate increases, but it soon stabilises to this new slightly increased rhythm of a beat as I go… whereas, when I put in a sudden burst of a sprint, the heart rate beats all the more intensely; you feel this from your breath to your heart pumping away. During those high-intensity moments of exercise, where the blood is pumping, the stimulus to release glucose from the liver exceeds glucose utilisation causing a rise in arterial glucose. In English: this means that the liver can react to that intensity and release stored glucose to the bloodstream, spiking levels upwards during activity. On the contrary, the prolonged activity such as in most forms of aerobic exercise, where the heart rate increases but only slightly, and maintains an steady pulse, the liver’s stored glycogen nears depletion, lowering your levels where the prospects of hypoglycaemia become more likely – meaning you need to fuel yourself up!”

An insight shared in a past Diathlete interview from Worcester Warriors legend & England-capped Rugby Union player, Chris Pennell, who has lived with type 1 diabetes for 15 years:

CP: “My prep for game doesn’t vary too much from most of the other players. I like to eat similar things on game days so there’s no surprises to deal with! Going into the warm up I tend to be around 6-7 in old money. I actually then inject before kick off as the adrenaline from the match makes me shoot up quickly. 2 units before the game and 1 at half time keeps me between 7-10 for the match.

Post game, I get some food quite quickly. As I’ve got insulin in my system already and with my body wanting to replenish, its really key to have carbs going in. I will keep a closer eye on my blood glucose than usual just to avoid any hypos.

I would probably say your diabetes is very personal to you. Getting to know your diabetes through lots of testing is key and it really doesn’t have to stop you in life. The one thing through sport I have discovered is how much easier it is to control when you lead an active lifestyle.” 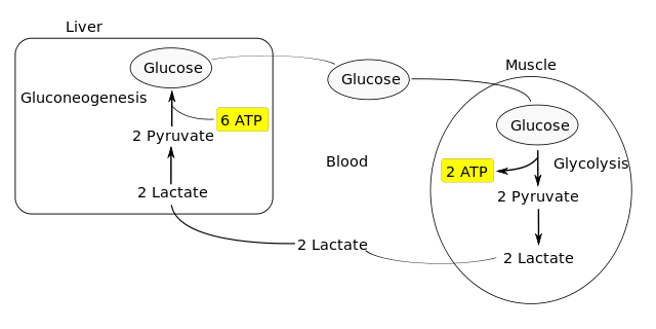 During anaerobic exercise Lactate is produced in muscles.

Any activity that has included anaerobic energy production should be followed by a cool down to help manage glucose levels. This can make managing diabetes easier and reduce the need for correction doses of insulin. 10-15minutes gentle aerobic exercise/stretching can really help glucose management plus it may reduce injury risk and improve performance for the next training session.

A positive message to those who need to hear it: type 1 diabetes doesn’t have to stop you from fulfilling your dreams.