“Turning up at the challenge intro and registration event with my baggy football shorts on and Diathlete hoody, with a bicycle 🚲 I had borrowed from a friend down my street (before he knew of it)  who had acquired it for £100 some years before,  it soon hit me that I might not be so well equipped here…” 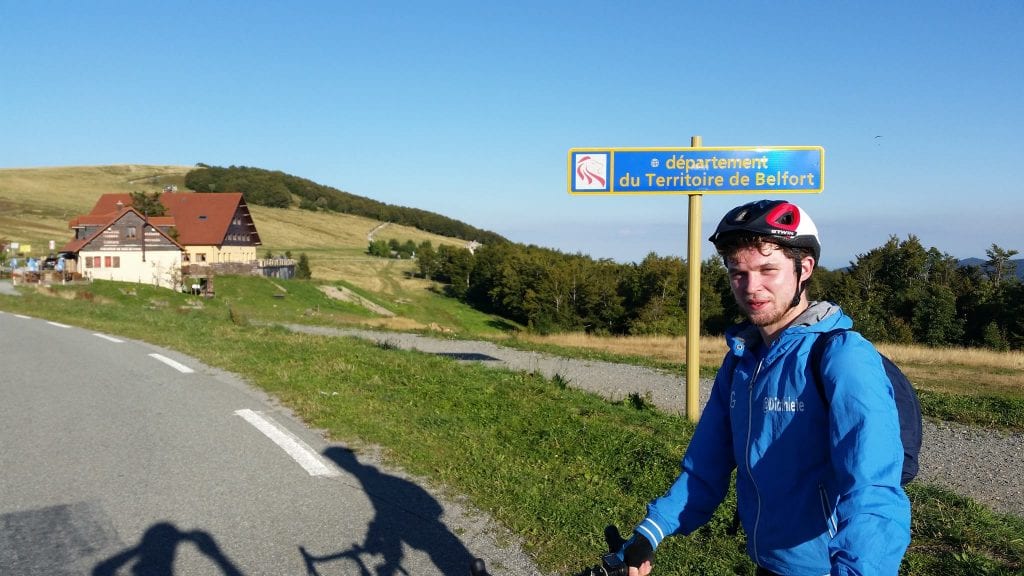 “There were high level appearing riders in their lycra outfits, with branding on jerseys which included the famous Team Novo Nordisk, the all professional cycling team living with diabetes. Multi thousand pound £££ road bikes on display. A handful of riders, like me, lived with type 1 diabetes; the majority were part of sponsors or cycling groups, lured by the appeal of a 3-stage cycling tour through Europe over 10 days.

Cycling can be a fairly expensive – probably why I never did it – in addition to requiring a technical knowledge to make repairs. On my only training ride, a week beforehand, I learnt the hard way that I had no idea what I was doing after setting out to cover 60 miles in Kent and falling short at around 30 with a punctured tyre and no repair kit!

Normally, as a runner, I fearlessly size up a challenge and tell myself I can do it. There was something about the prospects of cycling 1500km that had me a bit cagey. We were starting in Brussels and heading on through routes of France, including Paris, before going more mountainous via some of the Alps on our journey to Geneva. The challenge included some famous Tour de France sections; however, I regret to say with ignorance, I only follow Tour de France to check if the British guy is winning. IDF Europe had gotten in contact some weeks beforehand and said, say Gavin, you’re one of our Young Leaders and an athlete, do you fancy it? They had a complimentary space available and I liked the sound of Brussels, France and Geneva, it sounded a good holiday!

My confident part was in my diabetes. Having the past experiences with extreme challenges (running*) I knew that paying attention to levels more closely usually resulted in better levels in fact than my average days without a challenge! It was called the “MHealth Grand Tour” and was also a research study for mobile health and diabetes & exercise through those riding with T1D. I didn’t exactly know how cycling up and down mountains would impact me, but there was one key advantage received: a reunion with CGM, in being given a Dexcom G5 to use. The year before I’d got familiar with the G4 as I ran around Long Island and toured the States.

It took a while to adjust. I knew one great guy there, Rich, a fellow type 1, so for the first morning he was my riding buddy! But with my bike considerably less useful than the proper road bikes among me, and more so my experience of cycling limited apart from having my BMX stolen in my local estate as a kid, once the roads opened up and we got out the city, I found myself far behind the packs.

When it becomes just you and the road as the hours tick by, it becomes a mental challenge. My experience in running marathon challenges and also with diabetes were my biggest ally here; I’d been down that psychological basement many times before and found ways to push on. I think maybe some of the experienced riders made worthy bets on me falling out the tour as the days went by: my unorganised nature, from packing my bag to being on time in the mornings, was a further self hindrance – I like to enjoy breakfast time… though a chocolate croissant is not a nutritional breaky at all, France! I also extended unnecessary miles with my slacking attention spam… missing the yellow routed arrows upon occasion and seeing more of the French countryside than needed be!

On one occasion I needed rescuing as I had taken a complete detour. I called the challenge organiser Adam, who asked where I was. Reading a road sign I explained: “centre ville” which as it turns out meant “town centre.” Saving Private Gavin had to take place to figure out which village in France I was in.

As the routes went on confidence grew, and it needed to as the climbs also grew higher. In those tougher occasions I found myself a riding companion, another living with type 1 diabetes, from France, Jean-Louie. He was the oldest rider on the tour, having also lived with type 1 for over 50 years. He had attempted the challenge the year before but not made the distance, and in an admirable French fashion, he took time his way: the last to leave the hotel in the morning after breakfast, taking his time with passion to consume his lunch, and making himself very much at home whenever there was a drink and snack checkpoint. He was indeed at home through most of it! Jean-Louie didn’t speak a word of English, and outside of “Bonjour” and “Merci” I didn’t speak a word of French. Together, however, we found ourselves struggling up mountainous roads, encouraging each other on. “Alliez, alliez, alliez!” He would chant, for 6 hours.

The best moment for me was seeing him at the top of the final mountain on the final stretch into Geneva, breaking down with tears of happiness, where he shared (with translations from the team!) that when he first was diagnosed many generations ago, life with diabetes was completely restricted and he never imagined accomplishing such a challenge, and through his life he had seen this evolution of change in therapies which made him hopeful for the future generations. 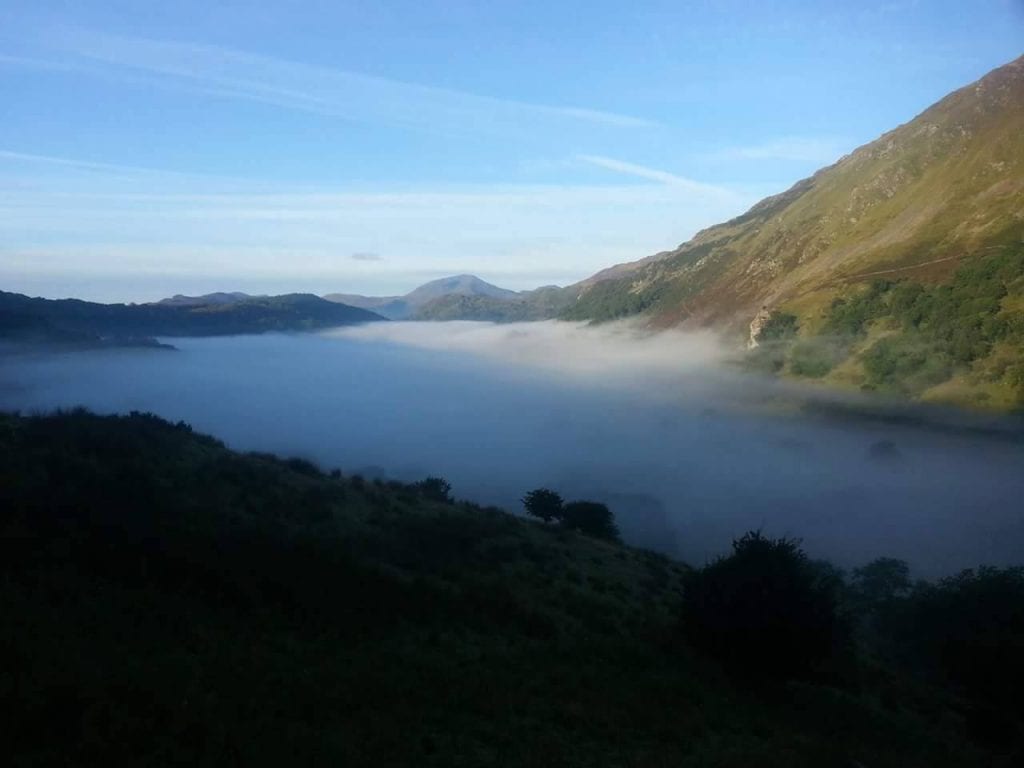 In regards to my levels, often my blood glucose levels did the opposite of the mountains we summited. When we had those long climbs, working hard and peddling away, with the never-ending turns up mountain – thinking constantly that the next turn will be the summit, only to endure the sinking feeling of a steeper slope on the next corner – levels decreased at a more rapid rate than when riding on the flatter ground, where they decreased more gradually. And then after taking in amazing scenery from the top, levels swiftly climbed higher and higher with hands on breaks, thundering down the mountain roads on the descent, 50-60-70km+ per hour! There could have been a few factors in the very high spikes which occurred: adrenaline. You’re going full speed, peering down a mountain! Basal. On MDI I tweaked my background dose of insulin and the descent wasn’t a short spell, it was a long few hours with little peddling, just sat on the rear hoping not to fall off when the road turns, clutching the breaks! Treating lower / low levels after the climb beforehand. After the struggle to reach mountain tops, much energy had been burned and hypos were likely, but in correcting the hypos and then descending it spiked levels.

The toughest day for me came on the first Alp Day. I had seen that Super Gav had passed on to the angels, and though I had only met him the once the year before, I had followed his journey and fight against leukodystrophy closely since. Every evening we had a cut off time at 7pm, if you hadn’t finished your ride on time the vans came out to collect you and bring you in to the accommodation for supper. Most evenings it was Jean-Louie and myself left on the road as the two tortoises, giving a stubborn answer to the driver that we weren’t going in for tea yet. Uros from Serbia often enjoying life in the van at that point, readying himself for some well earned grub!

On this occasion I was well off pace. The bike struggling up the higher slopes. It was coming to 9pm when I got in, beforehand having to make 2 attempts and release every bit of energy in the tank while standing on the bike – forcing myself up this 25% gradient – it felt like trying to ride up a wall! Walking into the dinner hall, where everyone was finishing their fine looking desserts, I received a standing ovation from the group. I had struggled until then to settle in to some extent as a non-cyclist taking on the challenge, but in pushing on all that way, without the lycra or riding shoes on, had earned a little appreciation. In that moment I broke down in tears, which may have looked ridiculous and nobody would have known why, but this sadness of Super Gav passing on at such a young age came flooding out of me. Once one tear rolled down my cheek a whole ocean soon followed.

I think the moral here is that whatever comes your way: type 1 diabetes, leukodystrophy, big mountain climbs that seem to never end, mental health, covid-19 and the entire world halting… whatever it is, never give up. Its in you to keep on going, to find your way. You may never see it but that attitude leaves a positive, spiritual mark on this world for the next generation.” 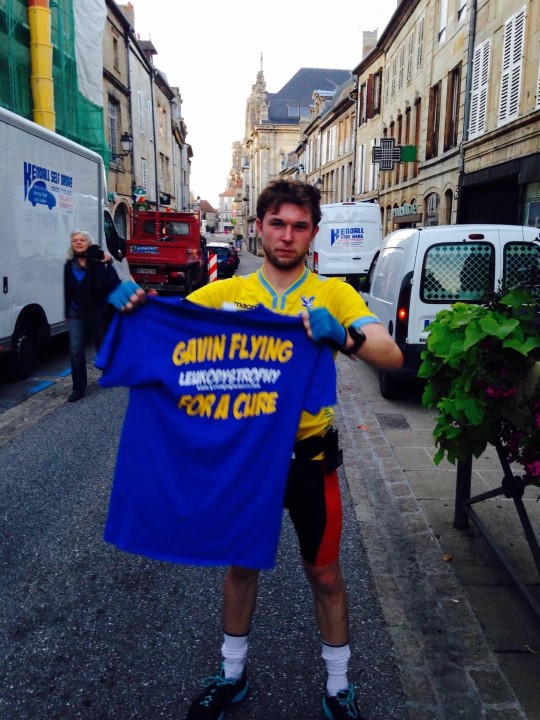