During 2019’s Rugby World Cup, England’s Henry Slade wasn’t the only person at the tournament living with diabetes to play a key role, Hisako Saito, from Japan, has lived with type 1 diabetes since 2006 and was a volunteer for the media team of Osaka’s Hanazona Stadium fixtures. With a deep passion for ballet, Hisako shares how she has rebuilt confidence since diagnosis which has seen her grow willing to put herself forward when opportunities call. 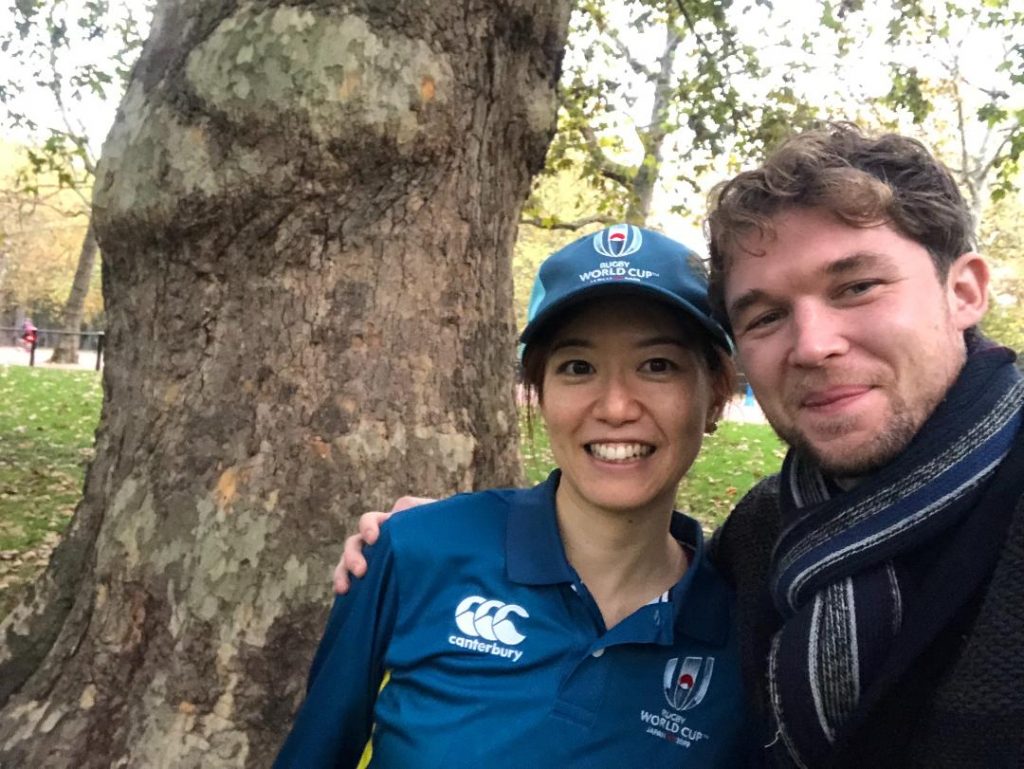 Hisako: “I was diagnosed as a 21-year old during the start of my studies in Nottingham, England. At the time I was very worried about not being able to stay in the UK for my studies and having to return home because of this disease – but the diabetes team at Queen’s Medical Centre reassured me of what the responsibilities were and I was fine to receive my insulin, going on to complete my Masters at UCL. Initially I was on my “honeymoon” period, but once I returned home to Tokyo that changed. My family did not know anything about type 1 diabetes to begin, where I had been diagnosed abroad, but one thing that gave my parents reassurance, particularly my dad, was a baseball player who was often in the news also living type 1 diabetes: Minoru Iwata, who played for the Tigers.

To begin with when back in Japan, I kept super positive all the time, but we are human. I needed counselling and eventually was put on tablets for depression. Close to my home however was a ballet class, and I started to go. I had some fears about hypoglycaemia but in going to ballet I found it worked well with my diabetes, and, more so, there was a freedom in my emotions; I believe the body and the mind are very connected, and after being diagnosed the mind can get negatively distracted. Ballet was the key for me to express myself and I found this worked a lot better than any depression tablets. Emotionally, the music was a sense of healing.”

How did Hisako adapt in regards to managing levels and being comfortable with doing with her passion for ballet? 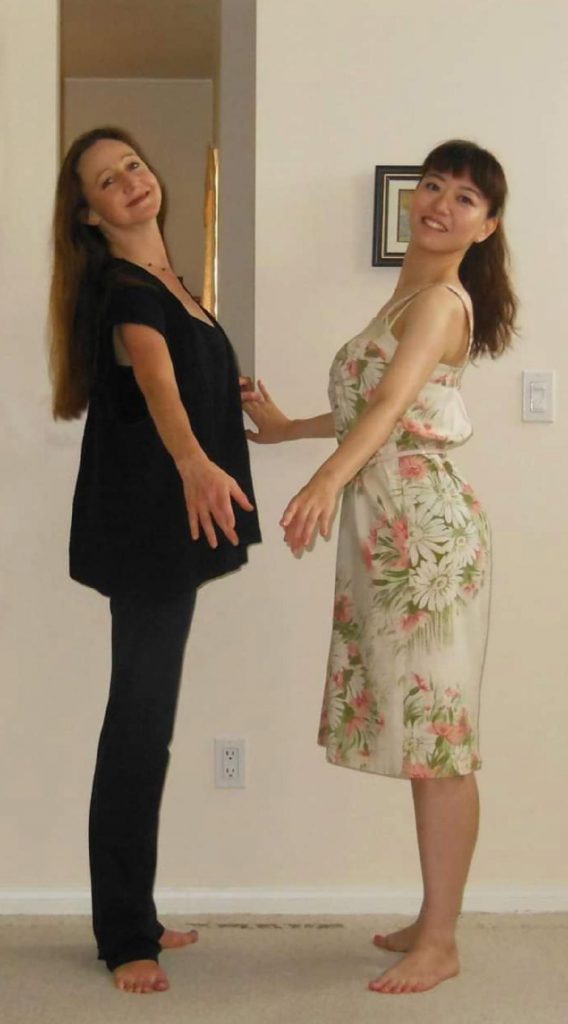 “It took some years to adapt to ballet with diabetes. At first, I thought to have extra carbs for fuel to burn and to take less insulin, but it didn’t work: I went high during sessions and felt bad and then went hypo during the night after. After struggling in this adjustment for a year I looked for a mentor, and came across Zippora Karz from the United States, a ballet dancer with type 1 diabetes. I read her book, which had an enormous impact on my life, “The Sugarless Plum” sharing her memoirs. Having since met and been supported by Zippora, I’ve gone on to translate her book into Japanese. Zippora instantly said to eat more protein before you dance, to have less of a spike during and less risk of hypo after.

A lot of the time it’s all about ‘count carbs’ and a ‘inject more’ mindset, but I feel it should be to use insulin to a maximum effect: having a lot higher doses of insulin throughout the day brings about more risk of hypos, and it’s quite artificial and so you don’t truly know how often it lasts. So I recommend using this amazing gift that we as type 1s depend on in most effective ways, with timings and looking up what you eat – not restricting but looking for more healthy diet. Not just carbs but the whole meal: vitamins and proteins- and this is not just diabetes but people in general.”

Did any pressure build up for Hisako with her passion for ballet, after it had given her this emotional freedom with diabetes?

“From a young age I had a passion for ballet, but as a child I didn’t always enjoy it so much, my teacher was lovely but scared me a little ha ha. Rekindling the passion for it in the class local to me after diagnosis meant there was this emotional freedom but also a lot to learn. It is also a sport with a lot of ‘pressure’ as to how you should appear, perhaps in general girls are almost expected to be ‘thin’ and I was very slim already before diagnosis – you always see a lot of models or TV personalities looking this seemingly perfect way – I wasn’t healthy and not having a regular period at the time; with insulin I put on a little bit of weight and then with hypos and eating more often it was a struggle, I understand how easy it is for girls to get eating disorders with type 1 diabetes.

“One thing that helped in this area was deciding to change insulin doses with menstrual cycle, it’s good to be aware that as a girl you know when your period is coming and if it’s delayed to ask why; when levels are too high it’s important to change your dose with it. Don’t be afraid of your shape, you have to be healthy that’s the most important part – ‘shape’ comes after.”

And so, the interesting sponsored outfit that Hisako was wearing to greet me in, the volunteering for the Rugby World Cup: 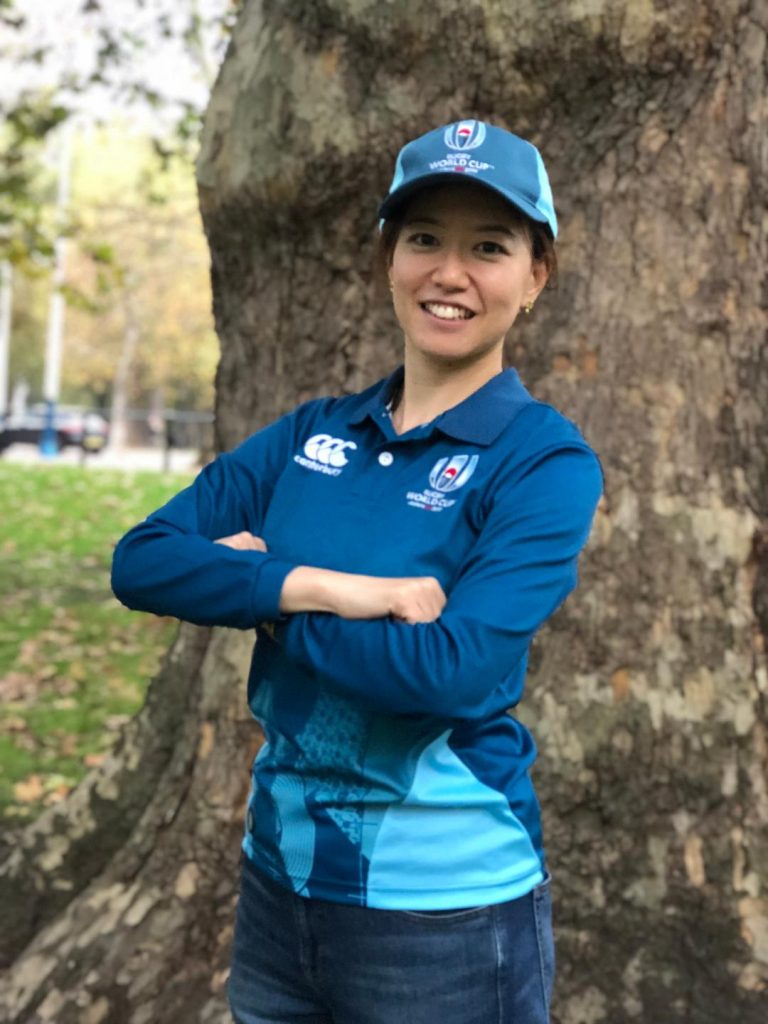 “I was in the media team helping foreign press at Osaka’s oldest rugby stadium with responsibilities during the media interviews: my two areas were ‘Captain’s Run’ (open practise) for the press on the day before fixtures, where teams would prepare in the stadium, and ‘Mic Run’ during media interviews after fixtures. In total we had 800 volunteers at the stadium but only 30 were allowed in for the Captain’s Run. One of the key guests I attended was the Mayor of Osaka. For the Georgia vs Fiji game, I was the mic runner passing the microphone to the press. The Georgian team were very big! The Fijians were beautiful, complete athletes.”

As a volunteer, were there any ‘diabetes hurdles’ that Hisako faced? 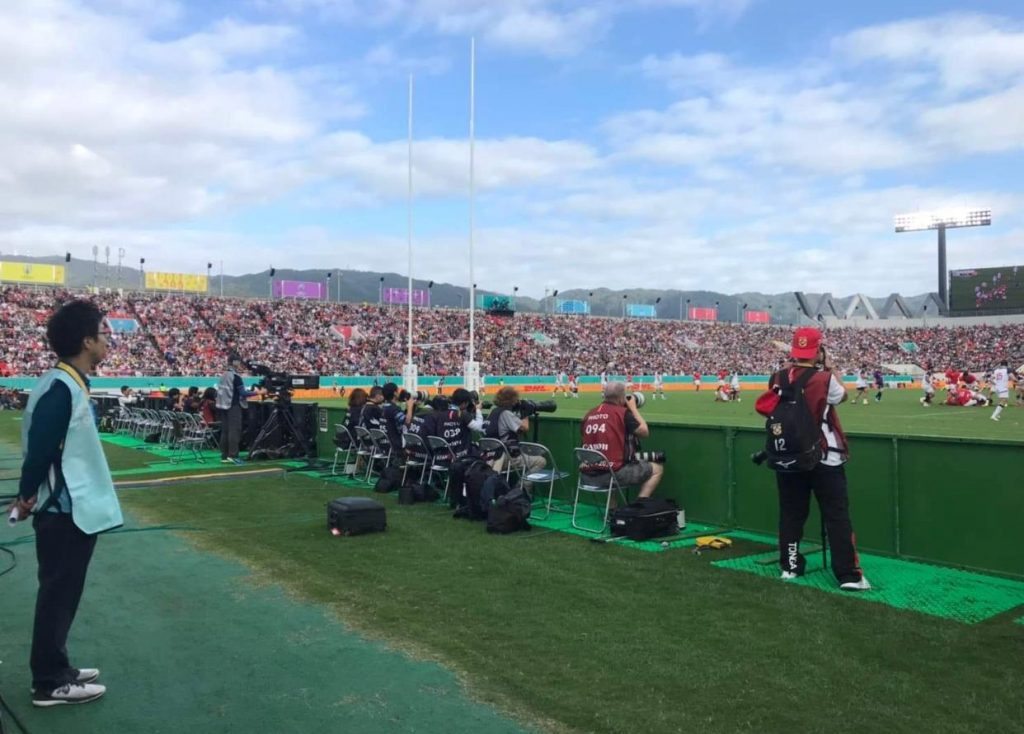 “We had just two, small inside pockets on our sponsored uniforms as volunteers, and it was strictly no liquids inside stadiums including for volunteers. I had a locker and so would test levels at the start of the day and keep my glucometer in the locker, with no space in my pockets.

We were provided lunch packs which was very high in carbs, so I tried to count the carbs and often left portions of rice out. The work wasn’t active physically, so I decided to eat more of the veg and protein over the rice to avoid spiking.

During press conferences I was nervous and that was when I went a bit higher. We had to be disciplined when interviews were on, but whenever hyper I felt stiff in the legs, needing the loo a lot, and had a quench of thirst. Excitement can also rise levels and, in being a part of this tournament, I was often excited!”

Best experience of the Rugby World Cup for her? – outside of Japan’s incredible displays!

“I got to know about rugby! I knew nothing of the sport beforehand and enjoyed learning a lot about it; it’s dangerous but exciting. One experience I was was with the photographers during the Tonga vs USA game, and based right on the Try line, which was a wonderful experience. With a passion for dance myself, I also really enjoyed watching the Fiji and Tonga team perform the Haka before the games started. And the colleagues I met, we are all very friendly and in contact with a WhatsApp chat group – after the Tonga vs USA game we went and watched the Japan vs Scotland game which meant a big celebration!” 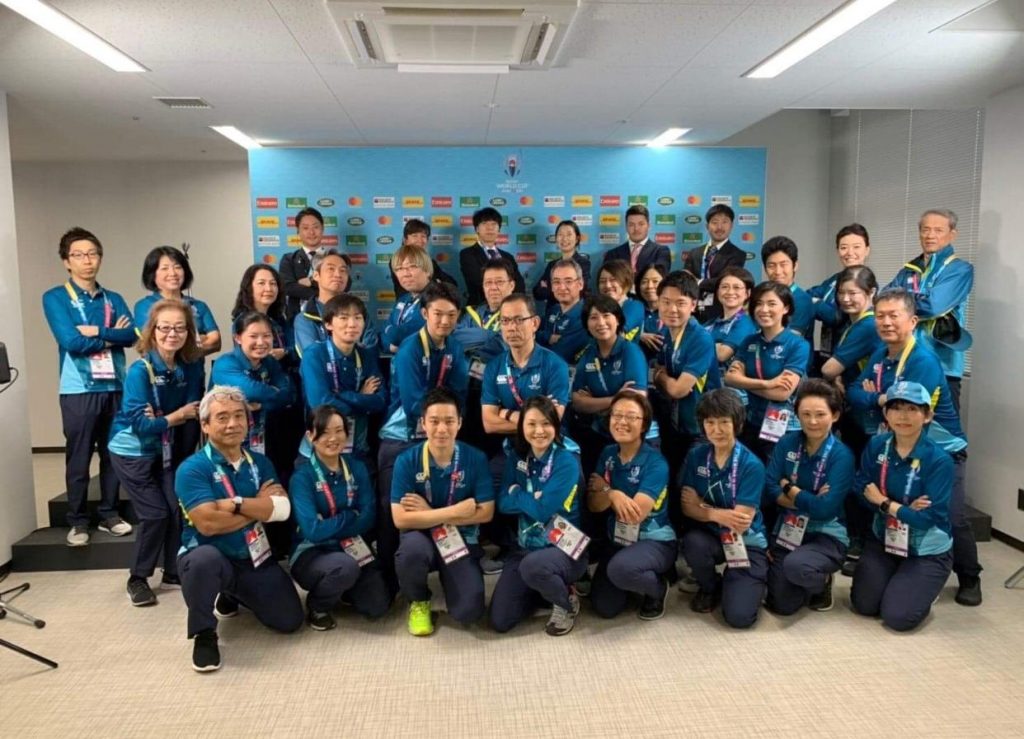 Hisako has gone on a journey from being diagnosed overseas, away from family, returning and struggling to the point of depression; but now is someone who has a presence of inner-happiness, a joy to be around and an independence to be willing to travel, volunteer for new opportunities and take part in what she loves doing, with that passion for ballet…

“In life it is not always about the good things that happen, but every experience is something to learn from, the good and the bad are areas that help you grow. Some people go faster, others slower, but you are still living your life. I got diabetes and it has taught me a lot – you can’t compare it to others; you have to learn to love your body, to love yourself and it will be applied to your diabetes in your own time.”