The goal was to raise funds for Marjorie’s Fund, that was the essential part! The challenge was to inspire fundraising by taking on running 7 marathons in 7 days in living with type 1 diabetes, starting and finishing in Manhattan, New York – where Marjorie’s Fund and their founders Dr. Jason Baker & Sandy Narayanan are based – while circulating large chunks of the Long Island coast in the routes. 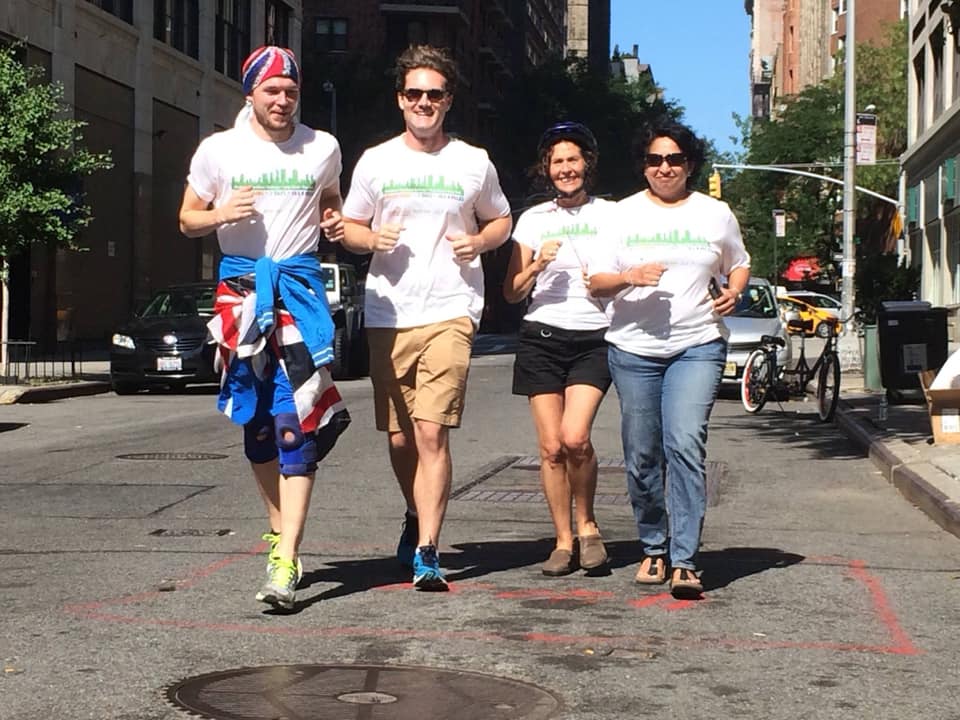 I was fortunate that Dexcom had agreed to support this initiative, which meant for the first time in my life with diabetes being given a Continuous Glucose Monitor (CGM) to use on the adventure. A long way from home over the Atlantic Ocean, touching down to a hectic schedule of events: New York City, with the small matter of running 7 marathons that week, and around the United States to Minneapolis, Miami, San Diego and San Francisco on a tour of diabetes community events for the next month, plugging a contrasting awareness of both the incredible work of Marjorie’s Fund, and the advancing technology in diabetes care of CGM.

It was 2014 and the Dexcom G4 had recently been released. Sensor insertion was entirely new to me and in those first experiences I was often very nervous – not wanting to mess it up or waste a sensor! It was a bit fiddly, that’s what I recall; a kind space-shuttle dropping off bit-by-bit until ready to land vibe… I was hoping it was Apollo 11 and not Apollo 13!

With great sadness this year, 2020, a close friend and role model, Lamin Dibba, passed on. I shared a taxi with Lamin in 2013, the year before this challenge, as we both arrived in Melbourne for the IDF’s Young Leaders in Diabetes training and World Diabetes Congress, and from there we got to know each other and became friends. He was from The Gambia but wanted to see changes happen not only in his home country, where health systems for crucial diabetes supplies are difficult and usually of high cost in addition to the lack of support in education, but all across Africa in the South Saharan region where this issue persists. Lamin was an advocate for positive and productive change in Africa. In this project we had joined forces. On one hand, Dr Baker and Marjorie’s Fund had been increasing their capabilities to support education programmes and in cases medical resources across a variety of locations with lower income settings; on the other, there was Lamin with his advocacy work through Dr Gaye and the Gambian Diabetes Association. The connection was made, shaping a goal to try and raise money for Marjorie’s Fund to be able to generate a type 1 diabetes support project in Gambia through Lamin.

Before then, having taken on a number of marathon challenges since 2008 on multiple daily injections and fingersticks, the ‘tactic’ I operated was to stop roughly every 5 miles and test my blood sugar levels. It required a lot of self-awareness, which can be hard to recognise changes of levels physically when exercising, and in my case made no easier with the loss of strong hypo-awareness after a frequent spell of hypos through my late-teenage / transitional years – when I moved to basal-bolus insulin, I was given fixed doses with no insight for carb-counting. The running tactic was: if on the lower side of 6 mmol/ls, consider an energy supplement via a bar, drink or gel, and if believing levels were lowering, test again in 2 miles! This required a lot of test strips, which weren’t always so available – I was fortunate enough at the time in the London Borough of Bexley to get 4 strips a day, which is too little, but there are those in the situation of Lamin, lucky to get 4 tests a week! On the Dexcom G4 CGM, you had to calibrate, so it required two tests a day (thereabouts) to ensure it was running smoothly, a real culture shock for me in the nicest of ways!

They were the weirdest marathons I ever ran. 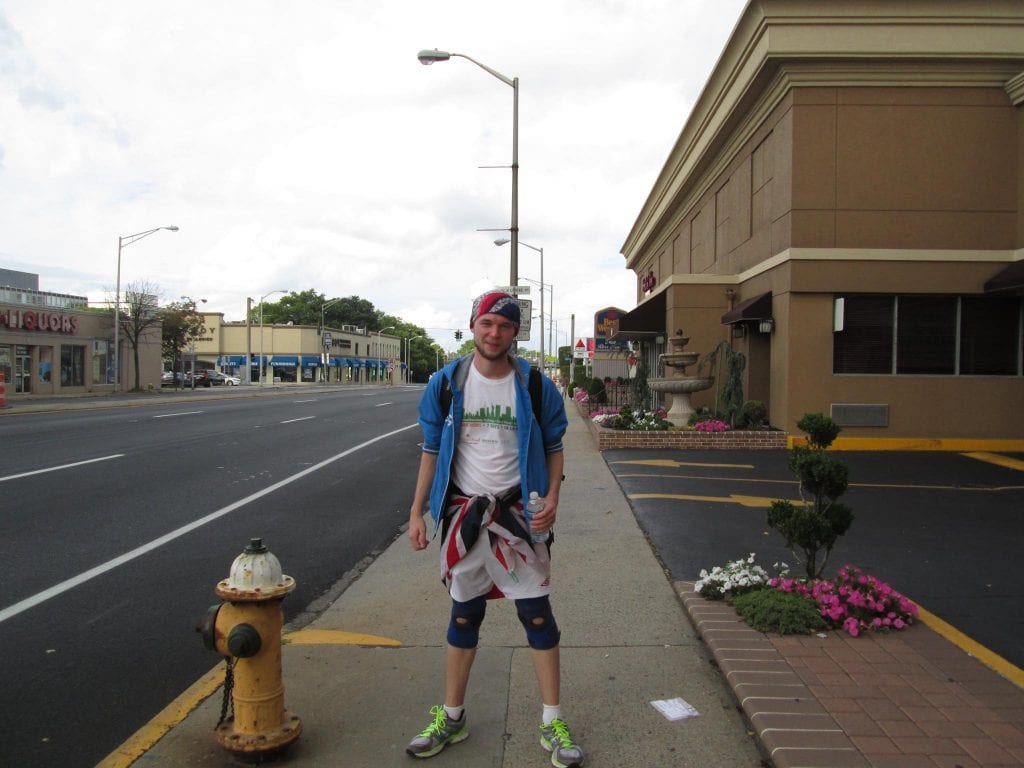 The difference was in the majority of past challenges beforehand, there was the luxury of a lot of community support. Family, friends, and fellow type 1s who could meet at start points, check points, finish lines or even run or cycle along side me, during the challenges. In this instance, I was far from home, and often far from community. It became emotionally quite challenging, while I also felt a little mentally tired; having this unique advantage of seeing my numbers on a device as and when I wanted, with arrows to tell me what those numbers were doing, was great but also meant my only company out there at times was diabetes: constantly hawking over levels. In the past I had just gone out and got stuck in, which gave me a great disadvantage in diabetes but a calmer mind, as naive as that might sound.

At one point at West Babylon, the south section of Long Island, I found myself in a rough neighborhood, staying at a cheap motel with red and yellow stains over the walls. I couldn’t get out of there fast enough come the morning! So fast in fact, I started the run without my running shorts on… Got to a half marathon point before I realised!

Running a marathon is not easy, let’s point that out! The hardest part was getting up the following mornings, getting those stiff legs moving again for another marathon. The key was to pace myself, the tank needed fuel for the whole week and not the one marathon, so maintaining a steady pace throughout meant suffering less the next day! This steady pace, approx 5 miles an hour meant the total running time was often somewhere around 5-6 hours a day on average, albeit in addition I’d stop for a lunch break and also update social media for the fundraising every 5 mile check point, normally meaning it was around a 7-8 hour day on the road (or more if I was slacking or lost!). It meant my blood glucose levels were decreasing during activity at a steady rate; at the end, quite often a spike would occur where levels fluctuated higher, before U-turning in the evenings back towards a hypo again. During the runs, using the CGM, I had no hypos. On 2 occasions I went low in the nights, waking up to the CGM alarms which was a whole new experience in itself! The G4, being an older device, just beeped aggressively until you did something. 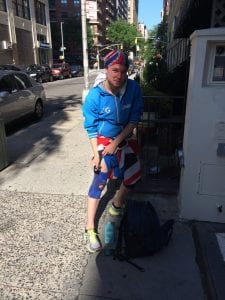 It was an emotional experience in many ways, being able to see how this new technology was working along-side me during such an extreme athletic challenge. My condition not needing so much to be this fear-factor that it so often had been considered. It was a first taste into how innovative change was occurring. My levels throughout running the marathons were never at high risk of hypos, due to the freedom for me to focus on the levels; however, on the final day I made a big hiccup: I went autopilot mode, having been reducing my basal insulin for the challenge, and without thinking in the morning, woke up and whacked in a full dose. I knew from there I was in trouble. Stopping at a ‘7/11’ at the start of Day 7, I loaded up on bars, knowing through the day they would be needed! I went low on 2 occasions – the Dexcom beeping away – which as expected wasn’t instant, but as hours and miles ticked by, it became a difficult test to maintain levels in range.  Seeing again the Manhattan skyline was in its own way inspiring; I’d never been there before this venture. For a long strip I ran beside it across the Hudson, the Bronx to Brooklyn Bridge, eventually crossing the bridge and entering the main island in heavy rainfall, before reaching the Marjorie’s Fund headquarters at a Thrift Shop where the team awaited. 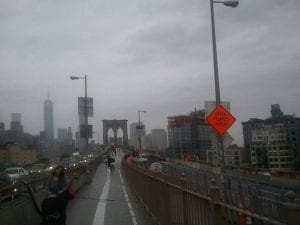 After completing the tour of the U.S in the month that followed, with a lot of local events and meeting many incredible people – none more so inspiring than a young boy I crossed paths with in Minneapolis called Super Gav, Gavin Quimby, who lived with a condition called Leukodystrophy, he was powering up a hill with a face of pure happiness that overcame any of life’s challenges – a generous donation was made by the Perez family who had hosted our event in Miami, and the Collier family who were based in Chicago area. That was worth every mile:

A year later at the next World Diabetes Congress, I heard from Lamin as he presented his project in The Gambia. He had achieved some outstanding outcomes: making community events, local educational home visits to families, and became able to operate hba1c tests for local people living with diabetes across the Banjul region. Thank you, my friend. 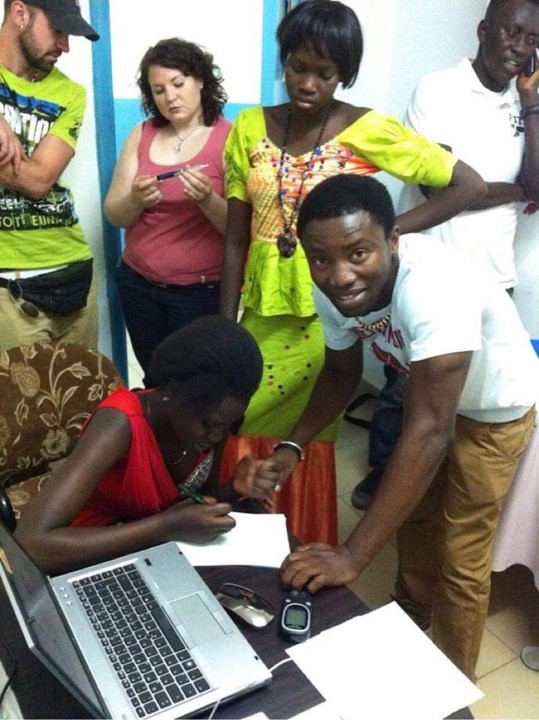 Some photos from the Diathlete USA Tour 2014: 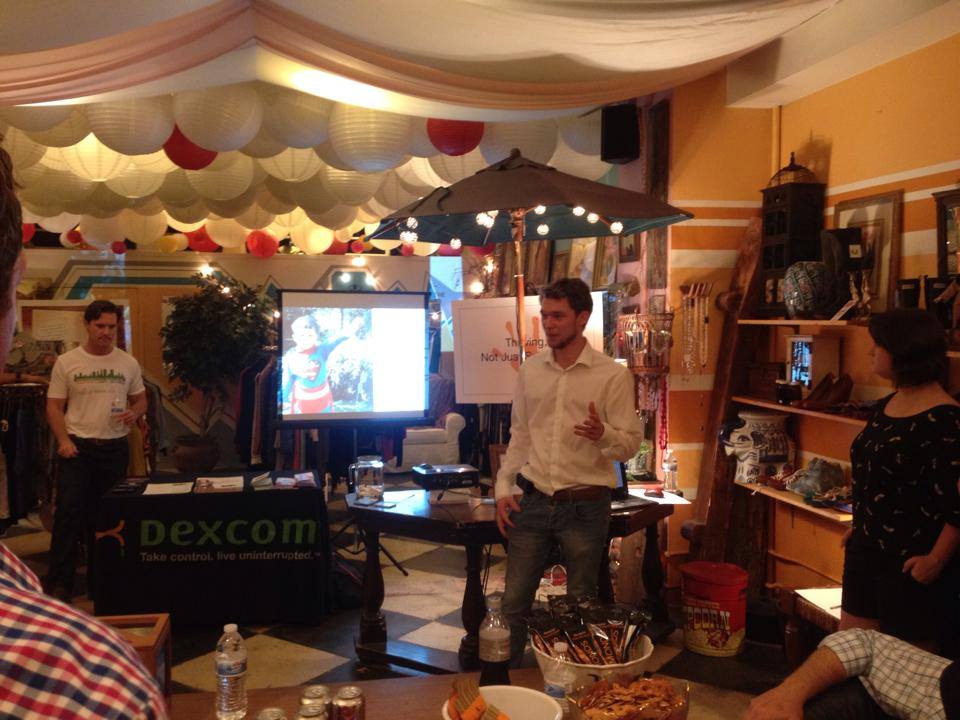 A social type 1 gathering in Minneapolis 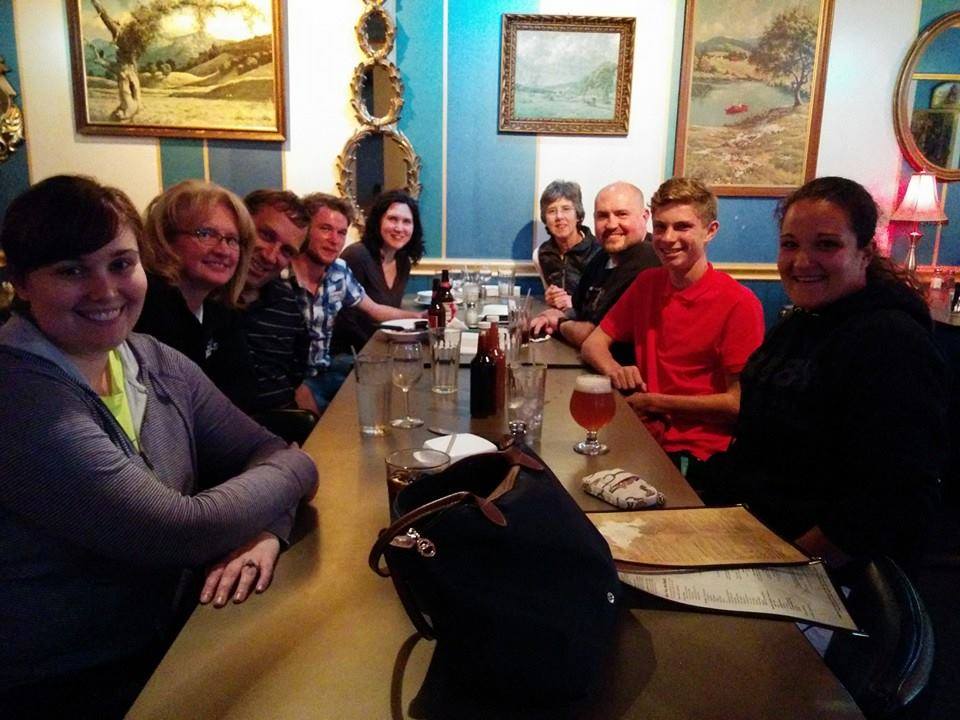 Meeting Super Gav in Minneapolis during a riverside cycle day 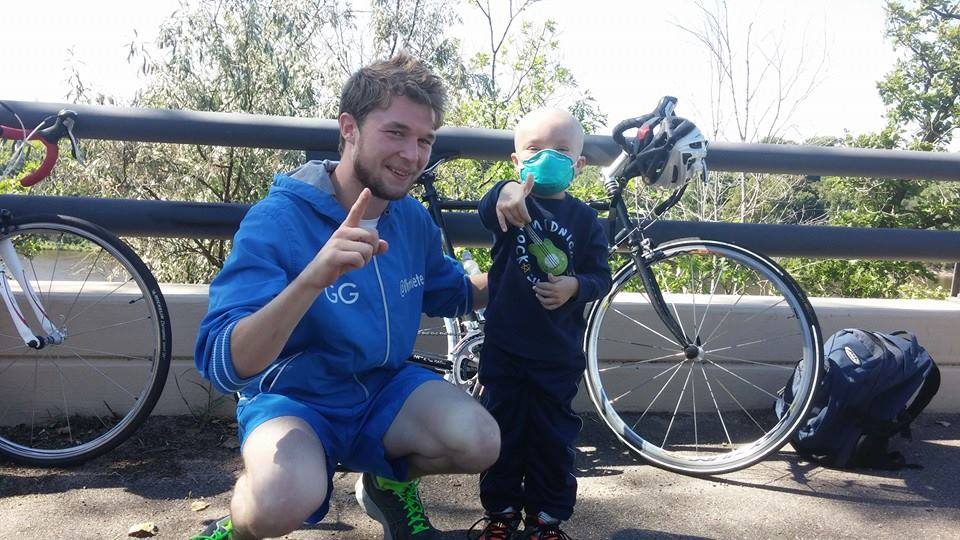 We visited the Diabetes Research Institute in Miami, where they gave us a tour and insight to their work 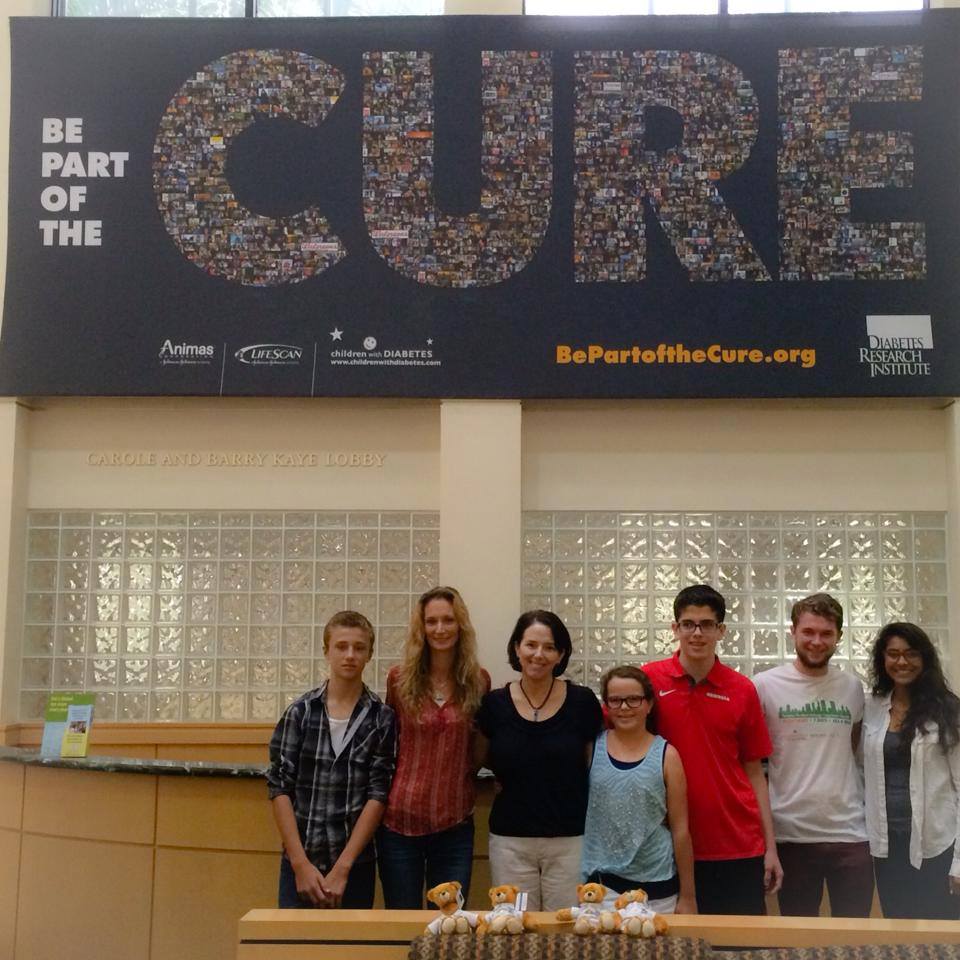 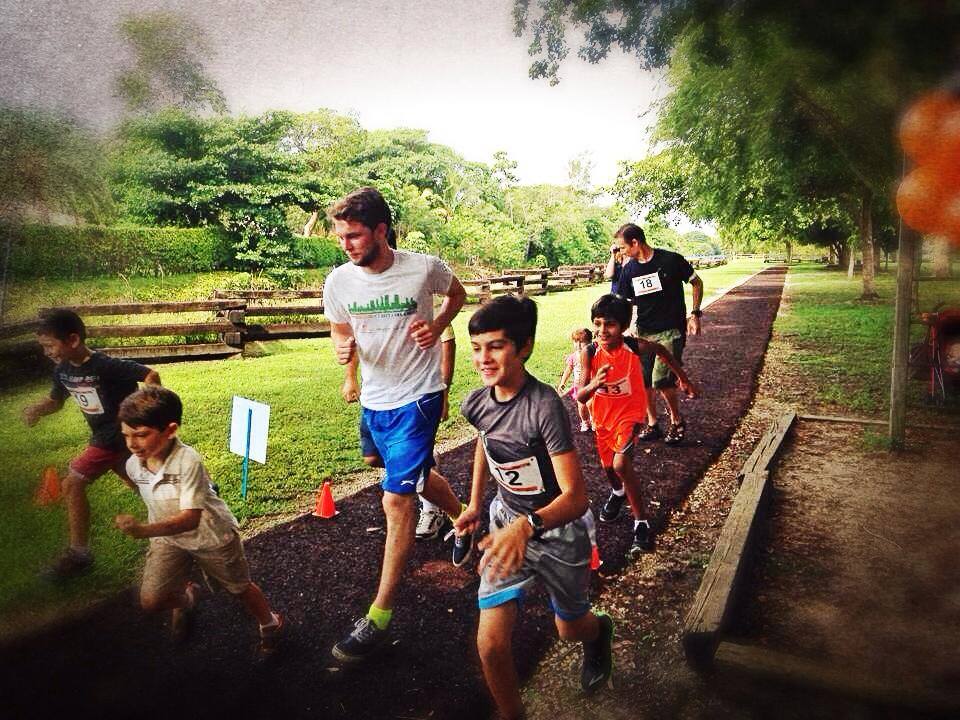 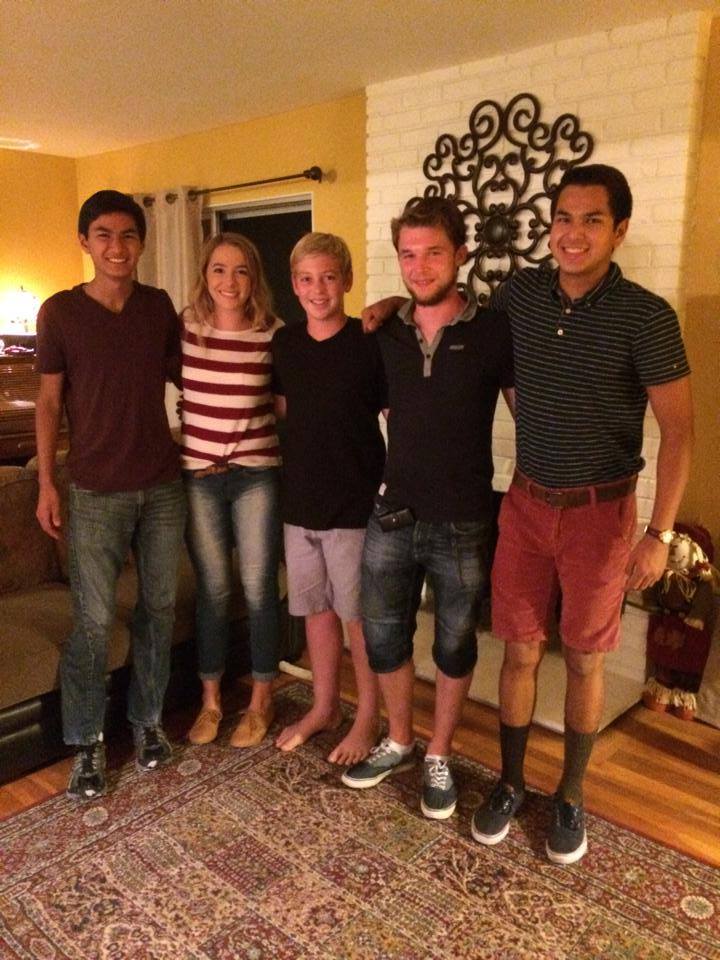 5k on the coast, San Diego, before presenting at the Dexcom HQ. 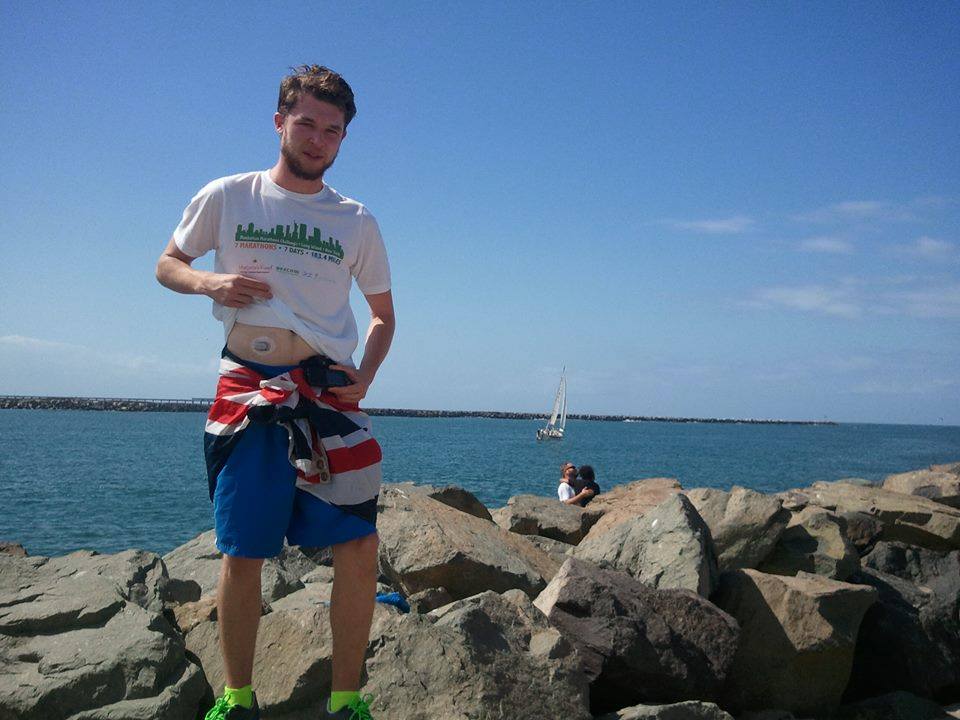 If you’re going to San Francisco, drop in and go to a DASH Camp! 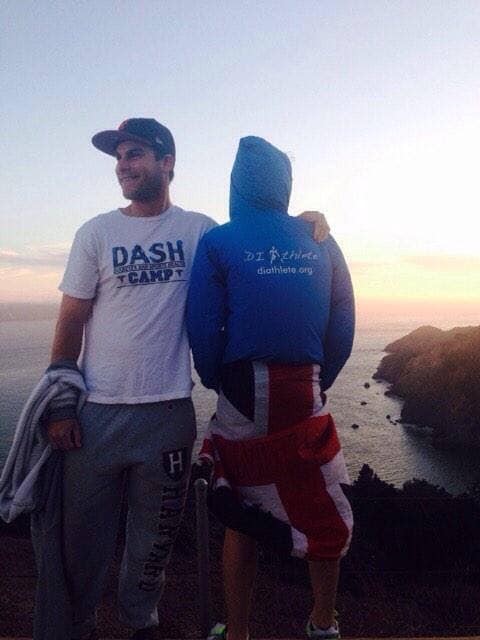