October – November is always a crazy period of events, the ‘health conference season’ which usually for me combines continuing the work of reaching local communities with the fancy international congress events in diabetes care. It is a season of hypocrisy: preaching about improving healthcare whilst conferencing with little exercise and often at these events, unhealthy snacking.

This year my schedule entailed completing my UK DiAthlete Workshops with one event in Haverfordwest, two London based events and one in Cheltenham, in between being at the 10th Children with Diabetes UK conference in Daventry – whilst living between Pembrokeshire and Bexley at the moment (two locations that aren’t exactly next to each other!) – I was already shattered before departing the UK in mid-October. This was then followed up by attending the ISPAD Conference in Boston, MA, and then going on to San Jose, Costa Rica, for the Dia de Ninos con Diabetes Congreso, stopping off in Brussels on the way back on World Diabetes Day for IDF Europe’s meeting in the European Parliament on improving the wellbeing of people with diabetes, before that same night arriving in London and heading straight to the black-tie JDRF fundraising Sugarplum Ball. 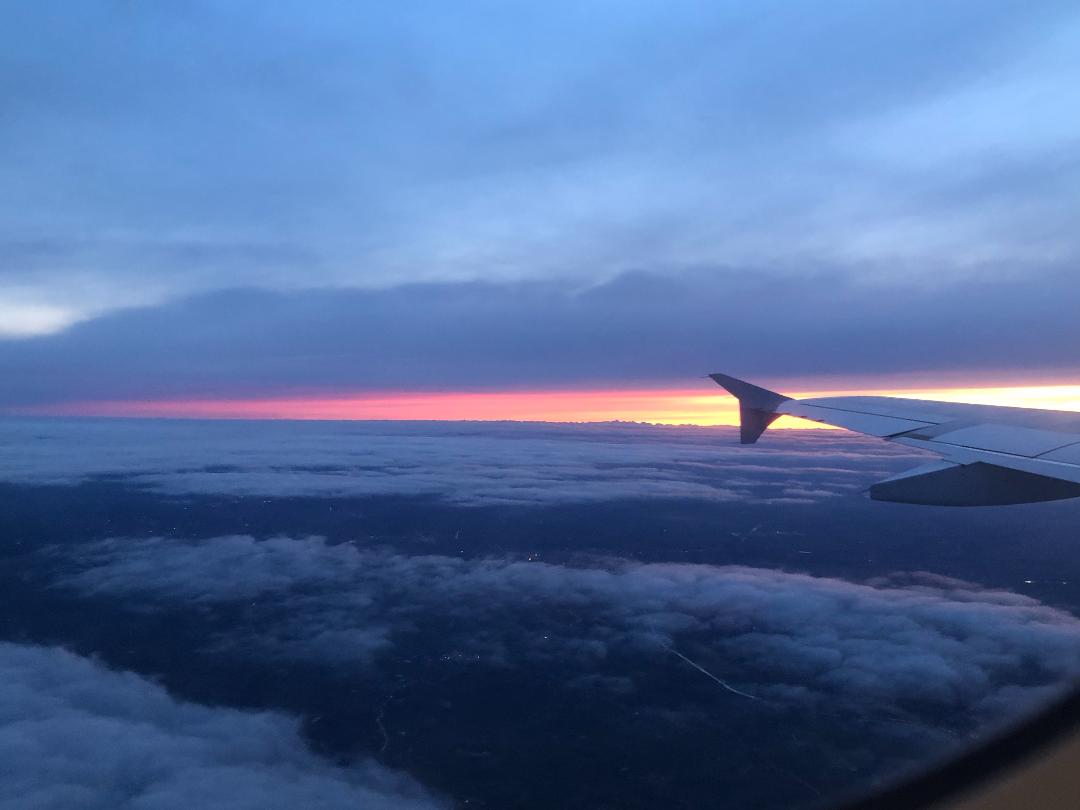 As a type 1, schedules like these are a lot to keep up with in general, the tiredness has a big impact where it is a form of physical stress – I found myself coming over with a bout of insomnia, just unable to find my way to sleep at night and then up early in the mornings readying to go again – and quite often stress leads to higher blood glucose levels. This can be similar with dehydration, lack of sleep, fears and worries, certain forms of activity… a lot more highs than on average whilst also making you prone to an absolute glucose crash and bad hypo too. Impacting the balance of your body is going to also impact the balance of your blood glucose levels.

I’m fortunate to be using a CGM in a Dexcom G6, therefore I travel about and even without wifi connection on an airplane I’m able to see my levels and keep ahead of them by seeing what is going on, not the number – the number has never been the key – it is knowing what that number is doing in order to base decisions on that counts. A CGM is a distinctive advantage there. But you have to pay constant attention to it even with such advances in technology, and that’s the part where with travel and tiredness I can slip up. I was able to recognise that on a split basal dose of detemir type insulin my timing wasn’t always so accurate, and even more so in changing time zones. This was another key cause of hyperglycaemic levels, not being disciplined enough on my basal insulin timings on multiple daily injections – the split of insulin was always something I was very happy with, especially when more active in running or in sports, I could perhaps adjust more freely.

Not as free as on a pump you could say, but nonetheless this detemir insulin was at its best on a split dose and fairly flexible too. In being less physically active however at this time of year, along with long hours of travel from A to B… or A to XYZ and then back to A in many cases (and let’s face it, I’m not running marathons every day anymore, I’m usually just running for a train as a bit of daily exercise) I made a decision to switch my basal insulin around, to use the more stronger lasting degludec type of insulin for my basal dose. Ultralong-acting basal insulin. Previously I had always been put off by it, thinking about whether I would exercise and how this might restrict me. But I decided that ‘conference season’ was hypocritical of me to not make decisions on my own health and to try this change. Using a Dexcom was a key component to make a decision like this, to be able to see more clearer the impact and base decisions from it. 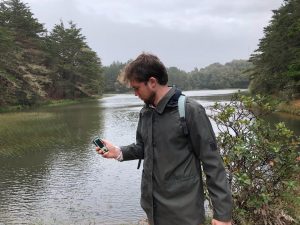 Dexcom G6 checking in Costa Rica after going onto Tresiba

I had previously been on a 14 and 14 unit split, morning and evening, on my long-acting insulin detemir. Unless doing a serious level of aerobic exercise of course, usually meaning there might have been a planned reduction to the morning 14. 28 units being the total daily basal dose on average, I decided in this insulin transition, with it being ultra-lasting, to reduce that amount as this would not be used in a daily split but once every 24 hours – thereabouts. The other reason for this decision to switch was that I had been bad on the timings previously which could lead to more highs, and so more corrections and a lot more insulin being inserted than I’d like – this is a man-made hormone drug after-all. With a degludec insulin being stronger, it meant I could be more time-flexible with the shot and not relying on it to be precisely within a certain hour as such. My initial decision was to take 25 units.

To begin, it was important to transition out of the previous insulin and into the new one. In taking on some advice, it seemed taking a shot of the previous basal would help this transition. I did so, but found I went a bit too low during the day, the next night I decided to reduce the other basal being used, and the night after stop using it all together and just have the degludec basal insulin working solo in the background. To get the correct estimations it is also important to get the carb-counting correct as possible with the daily rapid types of insulin, in order not to make a misjudgement and blame the basal insulin when actually it was too much bolus insulin being taken that caused a low. I found with the first day of solo degludec insulin that my levels ran a bit high, which could be expected, at around 11 mmol/s. However, previously if I got it wrong with the basal in regards to timing the shot at least, it would go much higher – so it seemed the degludec insulin had already worked well in creating a more solid control line in the background stability. After a few more days and close glucose monitoring I decided to increase the basal insulin by a unit. And that is where I am now at, 26 units of basal insulin taken one shot a day, over 28 units of the previous detemir basal taken in two shots a day. I’ve been happy with the more consistent in range flow whilst dealing with rather hectic schedules.

I never do myself any favours where stress is concerned. I’ll always have to struggle for a train or plane in the last minute! This time, luck not being my best friend, this opportunity in Brussels came up after my travel bookings back to London had already been made. So, it was a separate booking with about 4 hours to spare, but I had a connection in Madrid coming from San Jose to London. Then 4 hours to get my next flight, with a change of terminals, from London to Brussels. Needless to say Sod’s Law ensured my Madrid connection was held up for 3 hours as British Airways, as much as I love them, didn’t bring a spare tyre and the tyre burst. I got to Terminal 5, with my bags to collect and then to check in to the next flight in Terminal 2, with 50 minutes until departure. I wasn’t going to make it. On the Customer Service desk, however, luck did decide to add me on Facebook as a friend, they found out that my flight to Brussels had been delayed an hour and were able to check me in on the phone and I had to abandon my suitcase to catch the connections bus to T2, get through security there without a ticket printed, and catch my flight. Somehow, I did it! But of course not without stress… I then had to get from the EU Parliament at a 4pm finish to my flight back to London departing 4.55pm… so again never easy… especially when your bag doesn’t get through the scanner first time and the board says: LAST CALL! 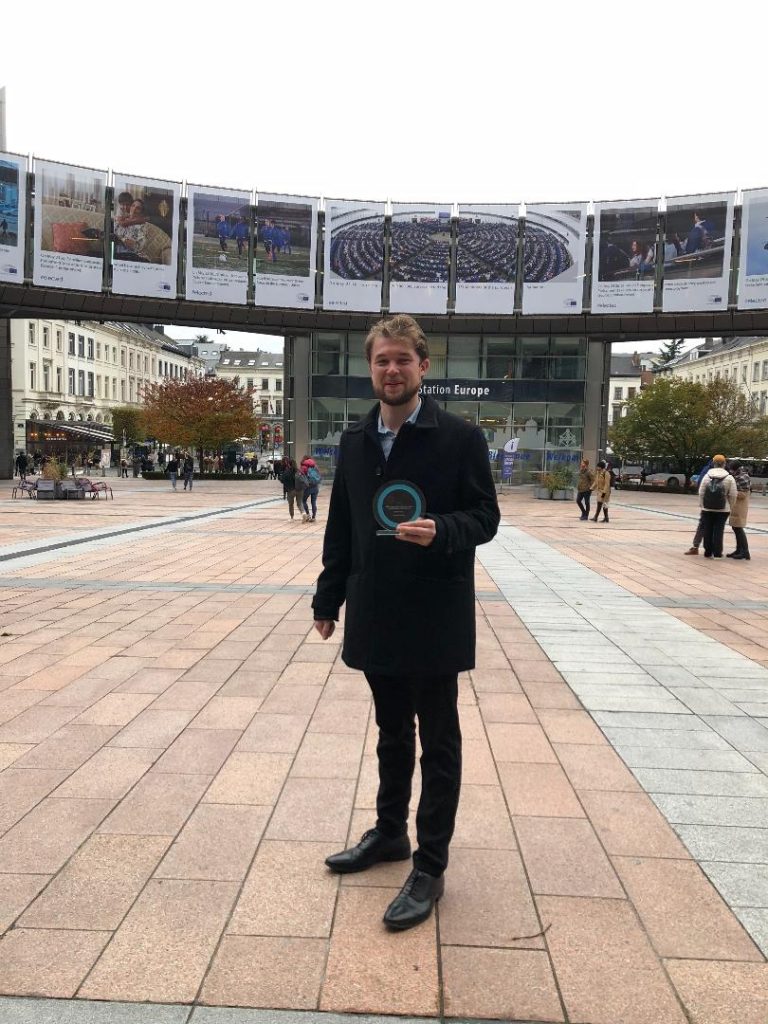 Outside the European Parliament, as controversial as that might seem in present times being an Englishman, following IDF Europe event and receiving the IDF Europe Longstanding Achiever award.

Despite that, I regained my suitcase, and made it to the Sugarplum Ball – losing a suitcase wheel in the process. I got changed in the Gents and treated a hypo crash! It was an honour to be on the Committee for this event and it went exceedingly well it is fair to say, with a huge well done to Jubie and the team, as £1.5million was raised, whilst those attending also enjoyed a live performance from Florence Welch. I got back to my uncle’s house in SE London around 3am, only to depart for Pembrokeshire for the first DiAthlete Trustee General Meeting at 9.30am. Making decisions is something any person with or without diabetes has to do on a daily basis. When it comes to living with type 1, this is even more essential – you have to be the pilot, your own doctor, and make those day to day decisions. And when you feel something is not working, you have to be the tactical genius to make the big calls. This has to take a lot of self-confidence to begin, and it further requires a resilience and continued adaptability in your mentality, to keep a close monitoring of your levels and to take action where you feel best. I’ve still a way to go with this insulin decision, particularly where exercise is concerned, but I feel at this time it was the best move and my levels are showing the answers for this on the whole as opposed to hectic schedules in the past. Utilising advanced technology is the underlining tactical tool for long-term independent decision making without extreme trial and error.

Florence at the Sugarplum Ball!